The Impact of Gravel on Crop Management

The West Midlands Group (WMG) has recently completed the project “The impact of gravel on crop management – a desktop study”. This investigatory project was funded by the Council of Grain Grower Organisations (COGGO). The study found that management of gravelly soils warrants re-examination as the gravel content of soils impacts on input and other management decisions.

COGGO Chairman, Mr Chris Wilkins said “Many start up projects are too small to justify submitting a proposal to GRDC, or the benefits are confined to a local area in Western Australia and don’t meet national or regional funding priorities. This is an example where the COGGO R&D fund has been able to respond quickly to provide catalytic funds to start a small project which could be further developed into a larger R&D proposal to GRDC, or a commercial partner, once the project has passed a “proof of concept” stage.”

The research fund is funded by COGGO members who voluntarily contribute 0.5% of their net farmgate returns for investment in innovative local research, development and extension projects. Approximately half a million dollars is allocated annually for R&D projects.

He also stressed that COGGO intends to play a catalytic role and that GRDC will remain the main source of research funding for the Australian Grain Industry. He said GRDC has a substantial income for investment into Research and Development and GRDC’s forecast income for 2014/15 is in the order of $186 million. The Corporation is funded jointly by a 0.99 per cent compulsory levy on grain growers that is matched by the Australian Government. The Australian Government matches the Corporation’s research expenditure up to a maximum of 0.5 per cent of the gross value of grains production, not exceeding the grower levies.

One aim of the The West Midlands Group’s project was to determine if decision support systems which account for the effect of fertilisers, lime, pesticides and herbicides, on crop yield need, to be adjusted for gravel in soils. A second aim was to determine how the gravel content of soil affected soil water relations, crop root growth and the impact of this on nutrient and water uptake by crops under different management conditions.
Soils with greater than 20% gravel in the surface make up 3 million hectares of the 18 million hectares of alienated agricultural land in south west corner of WA. Gravel is a largely ignored but important component of soils, particularly in the high rainfall areas of WA
Findings from the study include:-
• A survey of farmers, growers, advisers, agronomists and various specialists revealed that the management of gravelly soils was of more interest than the impact of the gravel content on management decision making and advice. The management of gravelly soils deserves a re-examination from the point of view of their unique properties and their interactions with ecological and management processes
• The gravel content of soils affects many soil processes which impact on input decision making but it is rarely sampled or estimated correctly.
• In some situations the quantitative gravel content is used where it is not justified and in other circumstances it is ignored where it should be taken into account.
• Some WA fertiliser recommendation systems adjust soil test available nutrients down according to gravel percentage. This means fertiliser rates go up. They often do not take account of gravel content on whole soil buffering properties which can improve the efficiency of fertiliser use and cause rates to go down.
• The effectiveness of lime goes up as gravel content increases and so recommended rates are correctly reduced when it is taken into account
• Assuming that gravel is inert to water uptake can be wrong, particularly in the wheatbelt. This can lead to overestimates of water infiltration and the leaching of nutrients.
• The gravel content of a soil increases root length density and the short term uptake rate of nutrients from the soil fines fractions, but can lead to the more rapid decline of nutrient supply in the longer term.
Media Contacts:
Contact West Midlands Group
Anne Wilkins
Executive Officer
West Midlands Group
PO Box 18, 3468 Dandaragan Road,
Dandaragan, Western Australia, 6507
Tel - 08 9651 4008
Fax - 08 9651 4107
Email - admin@wmgroup.org.au 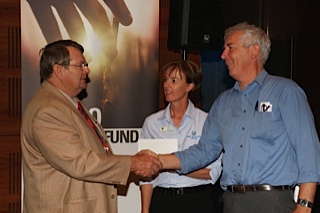